BCH Price Prediction – April 19
There has been a re-occurrence of the BCH/USD trade worth featuring erratically in a correctional moving manner towards the support of $800 level.

BCH/USD – Daily Chart
Like being the usual scenario that mostly has to play out most times in any pairing trading instrument, the BCH/USD isn’t spared as it continues in its bid to have a well-form of price correctional outlook. The 14-day SMA trading indicator is placed over the 50-day SMA trend-line as they both point towards the north. The re-occurrence of variant bearish candlesticks are taking their forms as well in a continual mode towards the trend-line of the smaller SMA. The Stochastic Oscillators have distinctively crossed the hairs from the overbought region to point towards the south nearing range 40. That indicates an ongoing falling pressure in the market.

Is there still an indication that the BCH/USD will hold long in its present correctional move?
As of the time of writing, indication has it that there is every probability that the BCH/USD market’s present downward correctional mode will be prolonged. As that may be the case, the bulls are therefore enjoined not to join the movement in the market signaling a downward force. Instead, they may have to be on the lookout for visible bearish reversal moves before considering a re-launch back into the crypto-trade.

As regards the downside of this crypto-fiat pair, the support level of $800 will play a determinant role in deciding a change of market trend especially, if eventually breached southward in favor of bears. Nevertheless, a breakdown of the level mentioned earlier may not as well lead to getting to see a sustainable sell-off trading position afterward. 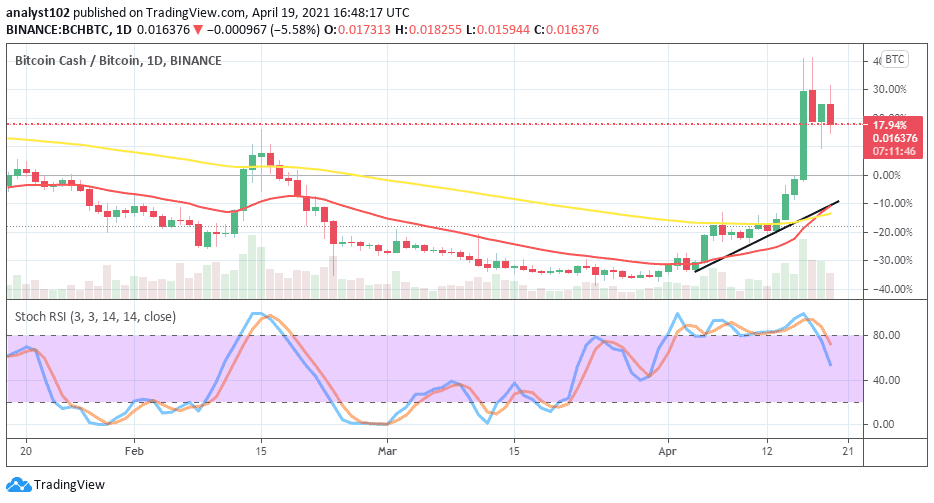 BCH/BTC Price Analysis
Comparing the level of market appreciation between Bitcoin Cash and Bitcoin, it is shown on the chart that the base trading instrument has taken a lead as paired with the chief counter-crypto. But, in the meantime, BTC appears to start putting pressure in resisting the further upswings of the BCH’s effort. The 50-day SMA trend-line has just been freshly intercepted from below to the north. And, they are far underneath the current high trading value of the pairing cryptocurrencies. The Stochastic Oscillators are bent to point towards the south to signify the presence of a declining-moving mode that is going on in the market as of writing.

Bitcoin Funding Rates Hit 14-Month High – What Could This Mean For The Market Leader?