BCH Price Prediction – May 19
There has been a significant drop in the market worth of BCH/USD. The crypto-economy now trades with a -12.48% reduction at the level of around $855.

BCH/USD – Daily Chart
The BCH/USD daily chart has again witnessed a notable decline between its two SMA trading zone. Today’s trading operation has succumbed to a downward pressure by the emergence of a bearish candlestick taking its form closely below the smaller SMA downward to the point of $800 where the bigger SMA is situated playing a supportive role on a long bullish running of the crypto-market. The 14-day SMA trend-line is now slightly bent to the south above the 50-day SMA indicator. The Stochastic Oscillators are in the oversold region moving in a consolidation manner to still suggest that a declining pressure is ongoing.

Will the BCH/USD price decline further?
As the support lower trading level of $800 of the BCH/USD market has been only touched, bulls may start bracing up for repositioning of their entries in the near time. However, the rate of market downward pressure currently may still have about three or more bearish candlesticks to form around the bigger SMA needed to occur to give a clearer picture of what their positioning entry would be.

As regards the downside, the current forces are intense to the extent that a larger support space level is traded past to the south. Bears are now expected to keep their pushes under the market line of $1,000 on a long-run outlook. Failure to hold the crypto market below that level, price may resume a gradual rebounding movement that will potentially pave way for upsides’ return in the market. 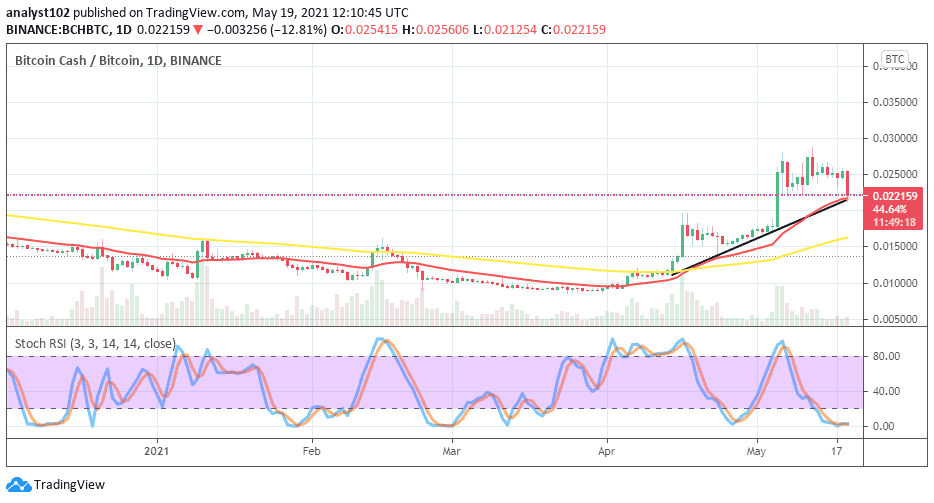 BCH/BTC Price Analysis
On the BCH/BTC daily price chart today, a bearish candlestick is in the making on a higher notable outlook to suggest a stronger push against the base crypto is in the loom by the flagship counter paring tool. As of writing, the smaller SMA and the bullish trend-line have touched from the top by the bearish candlestick. The 50-day SMA indicator is located below them pointing to the north path. The Stochastic Oscillators are in the oversold region with closed hairs. If the closed hairs are remained in the region closed, it means that there will be consolidation moves that will be in favor of the counter instrument.